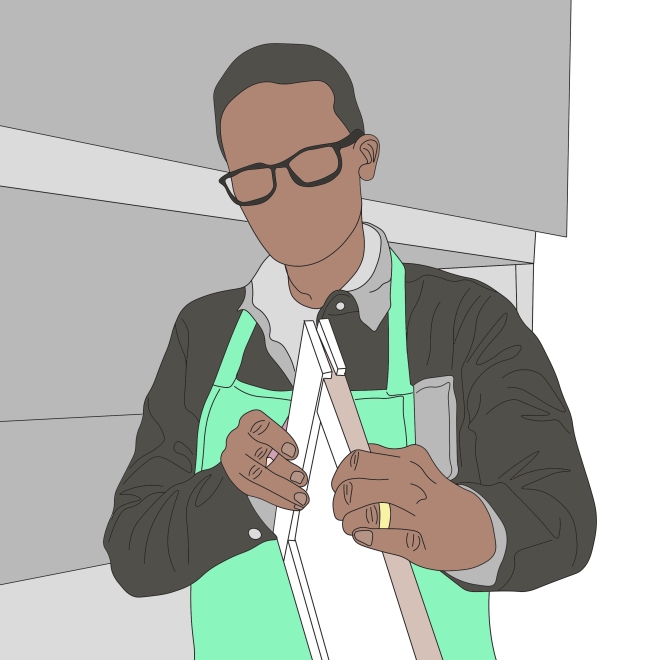 Although there haven’t been many blog posts for some time, this is not a true depiction of how busy and action-packed the end of 2018 turned out to be. In between settling into the 9-5 of work life, and continuing with my various projects, I found some free time to research other makers on social media. A small attempt to keep in the loop of what’s going on in the Maker World, and to see if I could invite any new members to the THIS GIRL MAKES community.

After seeing an Instagram post by fellow 2017 LINLEY Summer School alumnus and furniture enthusiast, Diggory Rush, I made my most recent discovery! Helen Welch is a furniture maker and the founder of the London School of Furniture Making, and coincidently, the inspiration that lead Diggory to study a degree in Furniture Design and Make at the CASS.

Whilst researching Helen and her furniture school, I found this amazing interview, which I suggest you give a quick read before continuing with this blog post: https://www.womenintottenham.com/home/get-making-furniture

I reached out to Helen with some additional questions, and I was delighted to receive such a thorough reply…

“I started my working career in a small workshop with four tutors, two women and two men. Without a shadow of a doubt, it was the openhearted support from these four that inspired me to continue with the trade and eventually set up my own school. Unfortunately, the same cannot be said of most of the other training I received in those early years. Had I left school and gone directly into my apprenticeship with the council I would probably have given up and taken a safer path. I’m done griping about how bad my experiences were with racist, homophobic or plain old idiotic work colleagues, but I will say that thankfully, there were a small handful of decent people who recognised what was happening and quietly let me know they had my back.

“To be honest I haven’t received much guidance. I’ve mostly fumbled my way through. I’ve made many, many mistakes and missteps but I think that’s par for the course when you are out on your own. There weren’t many places that could offer business advice, or start up funding so basically I didn’t get any. It’s a miracle I didn’t go bankrupt, as I really didn’t have a clue how to run a business. A few of my friends and I were in the same boat, so we just got on with it. I guess we encouraged each other to keep going, which is just as well because no one else was doing it. I owe a massive debt of gratitude to my partner who has supported my whims and notions over the past 22 years. She and I both know what I’ve put her through.

“I’ve been teaching for a long time now (25 years since you’re wondering); at first I did it as a way of supplementing my income while I was studying for my degree. I never thought it would be a career, but once I’d graduated I just kept on going, initially just few evenings a week. Gradually evenings became days and now I teach full-time. As much as I like making stuff, I realised somewhere along the line, that I didn’t like making stuff for customers. I don’t like the fact that you have to convince them that you’re not there to rip them off. It’s exhausting having to do it time and time again. Customers don’t understand the process and so rarely appreciate what it is you bring to the job. I tried not to take it personally, but it grated on me to the point where I needed to stop. This is my experience, but I see the toll it takes on the guys who I share my workspace with. Craftspeople are sensitive souls and we don’t like to be slighted.

“I love teaching. It’s an expansive way of dealing with people. Students come with an open mind and a willingness to try something new. It’s a refreshing change to the slightly adversarial nature of making for customers.
I feel duty bound to give students wanting to become professional makers ‘the talk’. Basically, the one that goes: customers are terrible people and you’ll never make any money making stuff yourself, but if you’re adamant that this is the career for you, come on in. I don’t really differentiate in my advice; both sexes get the same spiel. Earning even a basic living from furniture making is hard. 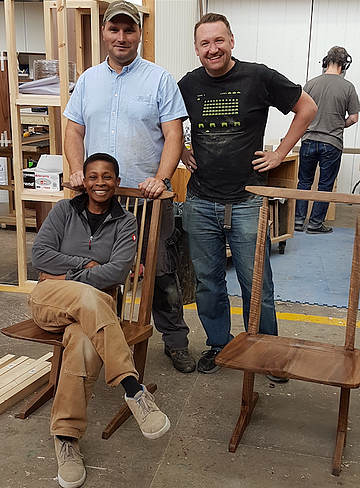 “Affordable workspaces in London are like hens’ teeth, and I don’t see the situation improving anytime soon. It’s a sorry state of affairs and I don’t think we are going to win out against the drive to build more housing. I hope as we get pushed further out to the margins that we’ll be able to develop creative hubs so we don’t become too isolated. Furniture makers can be quite insular, not because we don’t like people, but because we need space to think and work stuff out, so we need quiet. It’s nice to have a workshop to yourself, but you can also get very lonely. I guess I’m saying we all need a balance of space and interaction.

“The idea of the furniture maker content in their workshop, earning a living making fine furniture for an appreciative audience, is largely a myth. The majority of the work requested by customers is painted MDF, so all those fine hand skills learned at college are redundant. Most of us have to add carpentry skills to our making skills and do whatever our clients ask. So instead of making a beautiful dining table, you end up sanding floors, boxing in pipework and building an enclosure for the boiler. If you can’t be adaptable then you probably won’t survive very long. At the same time you’re moving further away from what you love doing.

“I’m going to say it, the majority of students that come to my school are white men. There, now it’s out in the open. I’m quite sure in the five years that it’s been running, the number of black men and women who have attended isn’t even in double digits. If you want to be a furniture maker, amateur or pro, you need money. Lessons aren’t free, good tools aren’t cheap and a decent home workshop is out of the question for most city dwellers. So it isn’t a surprise to me that my little black woman run school is largely devoid of actual black people. If the UK had a sizeable black middle class, then I think things would look very different. Do I care? Yes, but it is a bigger issue than just black people not wanting to make furniture.

“The school attracts a wide range of ages. Yes there are the newly retired, but the majority are mid thirties to forties professionals who want to explore furniture making as a hobby. Occasionally we’ll get someone like Diggory who arrived as an eager teenager, but students like him are in the minority. I know of a few students who have gone on to study furniture making full-time at other places like London Met and the Building Crafts College; I’m keeping a beady eye on their progress to see where they go next. If I’ve learned anything over the past 35 years, it’s that success is relative and can only be measured over decades. By that metric, I’m a more successful teacher than furniture maker.” 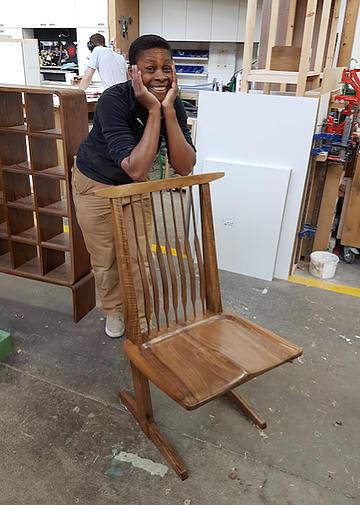