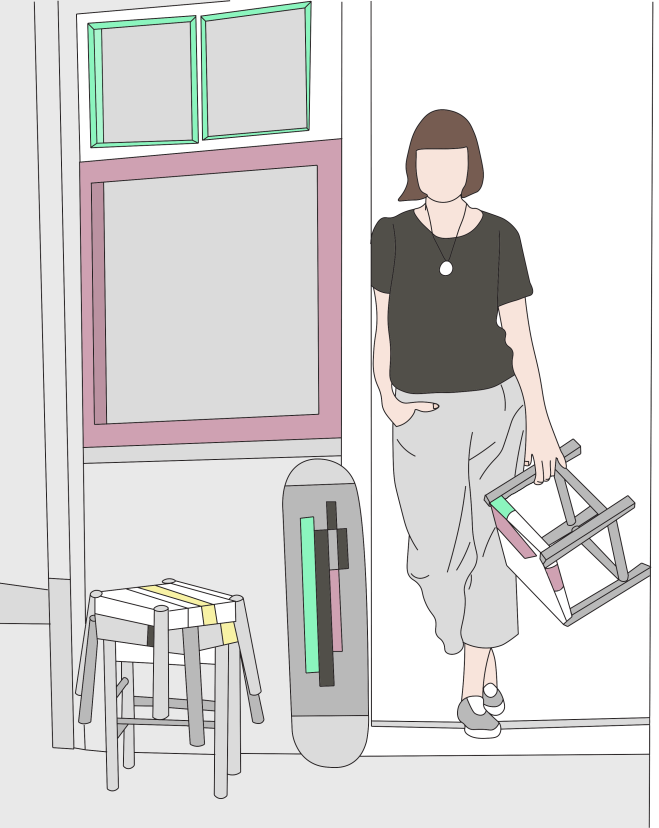 As I walked between the trade stands at the Old Truman Brewery on Brick Lane last month, I spotted the beautiful work of Jo Elbourne. During the first day of the London Design Fair it seemed impossible to approach her for a chat, as her work was proving to be popular with lots of other visitors. However, when I returned on the Friday, I managed to catch her for a brief chat. I introduced myself and mentioned I wished to feature her on the blog, and in that moment, as I went to take one of Jo’s business cards, I noticed that she was sporting one of Amy Isles Freeman’s (who has previously been featured on the THIS GIRL MAKES blog: https://this-girl-makes.com/2017/01/28/turning-crazy-interview-with-the-talented-amy-isles-freeman/) decorated pots. What a coincidence, I thought.

Jo Elbourne is a designer and maker working with string and cotton cord, wrapping and weaving the material around chair frames and found objects. Her work explores an array of outcomes from the seemingly simple act of manipulating cord in one direction against another.

As I discovered, she finds and reworks secondhand furniture, as well as also applying the same technique to wall-based artwork and freestanding objects, redefining or removing their original function together. Her new furniture pieces are from a varied, yet cohesive body of work using the frames themselves as a starting point for the weaving process.

The reclaiming of materials was the aspect of Jo’s practice that impressed me the most. She told me that she began using secondhand frames, partly out of necessity, but increasingly with the intention of bringing new relevance to furniture, which might otherwise be discarded. The non-functional pieces often utilise objects, which might be considered redundant, such as leftover bricks from a house-build, scraps of plywood off-cuts or a retired skateboard deck.

Jo explained, “The style of the frames often defines the woven application: a mid-century stool will command a different response than an Arts and Crafts-era ladderback chair. In my latest collection, I explore the notion of response in the design and construction of these seats.”

Her occasional furniture provides a distinctive take on the traditional craft of seat weaving, while the objects wrapped with cord showcase a more abstract approach, but still with an exploration of texture and colour as a starting point. She also produces small wall-mounted, woven ‘postcard’ pieces, which portray architectural scenes and spaces, both real and imagined, in a palette of muted tones.

The braided cotton cord, which forms the basis of most of her pieces, is made in England and is used predominantly in its unbleached state; the sections of colour cord and woven tape are either sourced pre-dyed or hand-dyed by Jo herself.

Jo currently works on a commission basis, creating one-off pieces for private clients, or bespoke items for designers and architects on professional interiors projects. In a continuing collaboration, she has partnered with secondhand furniture dealers, Committee of Taste, reweaving seats for chairs and stools that they have specifically sourced. The finished pieces are sold through the Committee of Taste shop and showroom (https://www.committeeoftaste.com). Items are made and stocked on an ad-hoc basis when the right frames present themselves.

Jo Elbourne graduated from Ravensbourne College of Design and Communication in 2000 with a degree in Fashion with Textiles and returned to hands-on making after working for many years as a menswear designer. Her focus turned seriously to producing her wrapped and woven work in 2015 when she set up her creative practice at Resort Studios in Margate (http://www.resortstudios.co.uk) on the Kent coast.

Resort is home to artists, designers, photographers, architects, musicians, filmmakers, and writers. The opportunity here to work collaboratively has been transformative; not only allowing her the physical space to work on larger pieces, but also opening up her practice to the idea of making less functional work. Many of her recent pieces have been directly informed by the studio environment, as well as the exposure to other creative disciplines and approaches.

Jo Elbourne is the winner of the 2017 Elle Decoration British Design Award for the Best in Craft. She was selected by Hole & Corner magazine to exhibit in the British Craft Pavilion- a curated space for contemporary British-based makers- as part of London Design Fair 2017.