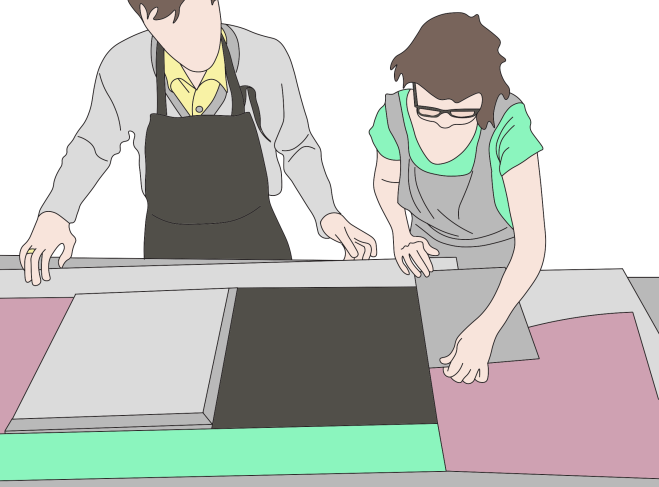 The final day of the LINLEY Summer School 2017 and part of me was excited that it was coming to an end, so that I could finally have a moment of rest, but another part of me, the majority, was sad that the week was soon to be over and that I would be heading back to Oxford, and reality. The week had inspired me in so many ways, but had also proven pretty challenging in others.

One difficulty that kept creeping up on me, despite my conscious attempts to not let it, was my insecurities as a maker. My experiences in woodwork are limited to the two years I have completed at Rycotewood, along with a few days work experience here and there, so it is easy for me to slip into these moments of self-doubt. However, these small internal battles that I have with myself were resolved as the final hour of Friday’s session saw the completion of my bedside table.

The rush of adrenalin as the final few screws fixed the drawer carcass to the crossed under frame; the feeling of delight as I watched the grain pop with colour once the first coat of Osmo oil was applied; and the giddiness of running my hands over the freshly finished surfaces and smooth arrased edges of the completed project. The struggles throughout the week were all made worthwhile once there was a line up of eight extremely individual bedside tables in the gallery; all stood proudly alongside a collection of works from influential and infamous designer-makers and artists.

The week has made me reflect on many aspects of craft, and in particular: who is craft for? The discussion with my housemates earlier in the week was still occupying my thoughts; how privileged am I to have the opportunity to study furniture making with master craftsmen in a twelfth century barn in the English countryside on such sunny days? The knowledge that not everyone is so lucky was lingering at the back of my mind. The idea that lovingly crafted objects can only be afforded by the very wealthy in our current economic structure pains me, and more often than not has made me question how I should direct my skills within the furniture industry. Craftsmanship over democracy?

However, as the evening panned out I found myself with a glass of Prosecco in hand (“Hi, I’m Hattie the champagne socialist”) discussing my work in the tithe barn of Messums Wiltshire. As a Geordie lass, I sometimes feel as though I am floating between two spheres, that of craftsmanship and crarhhhftmanship. At the start of the week I couldn’t be shaken from the belief that craft can only be appreciated by the wealthy and elite, but as I looked across the gallery that evening, and witnessed how animated the interactions going on around me were, I thought, ‘maybe it is more basic than that?’

I took the opportunity to introduce myself to Gareth Neal, the digital craftsman and furniture designer-maker that I have followed since my art foundation at Newcastle college. When I first saw Gareth’s work at Shipley Art Gallery (Gateshead) back in 2014, his Love Seat, designed and made as part of the Bodging Milano project, and his Queen Ann chair really struck a chord with me; that was a poignant moment in my pursuit of a future in furniture. I explained this to Gareth, and gave him my thanks. He told me that the Shipley Art Gallery had provided him with his first museum sale, and although the Love Seat was an object of real sentimental value- having been crafted by Gareth from green timber in the Clisset Woods of Herefordshire- he had decided to part with it for the sake of being able to afford a house.

“And I’m glad you did, Gareth, because I may not have been here speaking to you otherwise.”

Our conversation went on to discuss ‘pockets’. There are craft pockets, art pockets, design pockets; of people, of places, of things. The conclusion was that no matter what pocket or if any pocket you fall into, you have got to satisfy your own practise before trying to appeal to larger markets. Because- as Gareth pointed out- he now provides work for several workshops across the country, if they manufacture his designs. The happiness associated to a piece of furniture is not limited to the maker and the final owner. There are the foresters, as we had seen on the Fonthill Estate the day before; the sawmills; the workshop owners; the designers; the cabinetmakers; the CAD monkeys; the apprentices; the suppliers; the sub-contractors; the van drivers; the gallery owners; the gallery visitors; the bloggers; people on Instagram, Pinterest; the students; the hobbyists; the shop owners; and finally- the consumers. The network involved in appreciating a piece of furniture is so vast that it seems almost irrelevant which billionaire’s house it ends up gathering dust in!

As long as initiatives like the LINLEY Summer School and spaces like Messums Wiltshire exist, the networks that take joy from the craft process will only continue to grow. During the week Jonathon Rose had to attend to his pregnant wife, so we continued our work with his replacement, Brody. He has worked for Jonathon since he was 15, first on work experience, then as an apprentice where he trained part-time at Rycotewood Furniture Centre, and now as a full-time cabinetmaker with a nack for high quality finishing. Brody was a great help to all the students throughout the course and demonstrated to me again that craft- even at the highest level of quality and price- can be enjoyed and appreciated by anyone.

During the evening, a lady approached me and told me that my work had made her smile. When I decided to create a marquetry top with the image of a female figure holding a plane determinedly, I was choosing to tell the story of how I came to be at the LINLEY Summer School, and revealing a bit of myself, as the maker. The knowledge that something you have created has ‘resonated’ with someone else, enough to bring a smile to their face, was a good enough reason (for me) to pursue craft, than trying to reinstate a more William Morris socialist idealism. We experience the World through objects, and no matter how difficult times get- individually, nationally, internationally, globally- people are always going to appreciate art and carry on making.